Please join us for our fourth annual Toronto Bold and Cold 5k at Coronation Park on Saturday November 23rd! This event is in support of the Team Unbreakable Run for Youth Mental Health program in Toronto, and is open to any and all interested community members. To register click here: https://www.giveffect.com/campaigns/11773-the-toronto-bold-and-cold-5k-2019
ROUTE CHANGE  * CONSTRUCTION* – The run MIGHT be starting in the field next to the baseball diamonds and heading west on the grass towards the trail if the path is still under construction. Runners will no longer be diverting left through the Inuksuk park, but rather running straight out along the MGT along the north trail. This is a tighter squeeze than usual, so we ask that all runners be mindful of the children on the route and the roadway. We just received this information, so we appreciate the understanding of all participants!

Race kits are picked up the day of the event. Kit pick up begins promptly at 8 am. The guided warm up will begin at 9:15 am. The race starts at 9:30 am. Bag/Coat check is at the registration table.

Limited parking is available in Coronation Park. Parking options for the area surrounding Coronation Park can be found here : https://parking.greenp.com/find-parking/?a=coronation+park+

The Three Pillars
by Nils Blondon

I’ve had an untraditional journey.  A path defined more by chance than planning, more by grace than reason.  I never thought I would be a runner. I never imagined that running, a sport I loathed for the bulk of my life, would become something of a career for me. Not as a professional athlete, but as the coordinator of a youth program that combines running with mental health. And as the recent science has proven, the relationship between the two is deeply symbiotic.

Read More about Team Unbreakable’s Nils Blondon and how he has leveraging running as an antidote to life. Learn how children he has worked with over the yearS have helped him re-frame his attitude and enlivened his spirit.

Mark Trenton is a busy accountant by day, but in his spare time he is also a marathon runner and race consultant to various charitable groups.  When Team Unbreakable created a Toronto school program, he stepped up to help organize the first Bold and Cold 5k and he continues to be involved.

On Sunday Oct. 20 he will be the race director for the Art in Motion 10K/5K/2K in Kleinburg, a race he founded to help raise money for Juvenile Arthritis and SickKids Hospital. Mark says he was motivated to fundraise for Juvenile Arthritis (JA) after his daughter was diagnosed with symptoms at 7-years-old.  For nine years he was a founding member and organizer of the Toronto A Midsummer Night’s 30K Run with proceeds from the event going to JA at SickKids.

Art in Motion features a spectacular fall trail run at the Boyd Conservation Area.  There is a VIP program with a host of perks for people who can fundraise for the event, including a guided tour of the McMichael Art Gallery in Kleinburg.  In its third year, the Art in Motion run continues to increase in size and $38,000 has been raised in just the past two years. The focus of the run is on awareness and fundraising. Corporate sponsors like Telax are helping and it has provided free registrations for JA fundraisers who raise more than $150.

Mark and his team started a scholarship program for kids with arthritis. Aurora Tupechka is the 2019 scholarship award winner who is in fourth year university as a biology major. She writes, “I’m very fortunate that there is a treatment for Rheumatoid Arthritis. Despite my treatment, I still have to deal with the symptoms that my peers do not and I have found ways to overcome these struggles.”

Mark has also supported Team Unbreakable by being the first person to run 1,000 kilometres and raised a $1 for every kilometer along the way.  He has seen up close how depression and mental illness impacts people that are close to him and his family.  That is why he was willing to help with Team Unbreakable when asked. Last year he ran the Chicago marathon and has now completed 30 marathons.

“We can’t thank Mark enough for his continued support.  He knowledge of racing events and the details involved in working with the city is invaluable to us,” says Nils Blondon, Program Coordinator for Team Unbreakable.

Earlier this year, Evelyn Pyper, Manager, Real World Evidence at  Janssen Inc. and strong supporter of Team Unbreakable in Canada, entered Team Unbreakable into her organization’s  corporate giving initiative. The giving initiative allowed employees to 1) nominate their favourite Canadian charity and 2) vote on where corporate giving dollars should be allocated among the top nominated charities.

Evelyn had previously supported research with Team Unbreakable at McMaster University as part of an undergrad course.  “I really appreciate the fact that Janssen allowed employees to have input into choosing which charities to support and I didn’t want to pass up this opportunity,” Evelyn said.  “I knew it would be a small commitment of time (to submit an entry) but it could have a huge impact for Team Unbreakable.”

Evelyn’s submission was selected by a review committee as one of the top five Canadian charities to support; a second selection round included voting by employees who were able to allocate dollars to their charity of choice.  To complement her submission, Evelyn produced a video about the charity. “I was shocked at all the positive responses within the organization because there were so many worthwhile causes. People were drawn to the story and the issue of mental health – it sparked a lot of discussions,” she said. As a result of voting, Team Unbreakable received a donation from the corporate giving initiative. 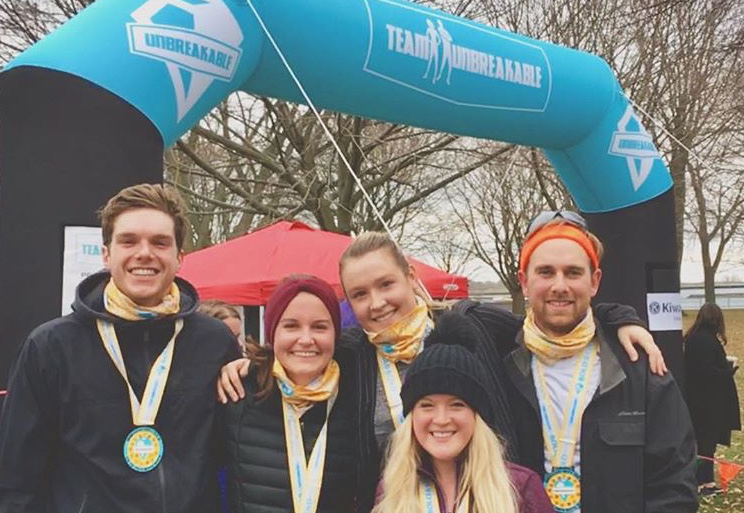 Photo: Evelyn with friends at the Toronto Bold and Cold 5K last November

“Mental and physical health are a valued part of our workplace culture and it goes beyond this charity challenge. I know that Janssen believes in supporting a healthy workforce (with its own programs) and its actions speak louder than words,” she said. One example of this is a 5K run that is held annually for employees at its Canadian campus in North York.

As a volunteer and student researcher years ago at Hamilton’s St. Joseph’s Healthcare Mood Disorders Clinic, Evelyn was able to see first-hand how impactful running programs can be for youth with severe anxiety and depression. She said her experiences with Team Unbreakable helped shaped her academic and professional pursuits that followed. Evelyn went on to complete her Masters Degree in Public Health at Queen’s University and worked for Public Health Ontario in the area of health promotion, with a focus on youth physical and mental health.

Not a fan of running in high school, Evelyn now says that running is her favourite activity and nothing compares to the sense of  joy and accomplishment after completing a run.  She has completed the Toronto Unbreakable Bold & Cold 5k in Toronto last year and hopes to stay active in supporting the charity. 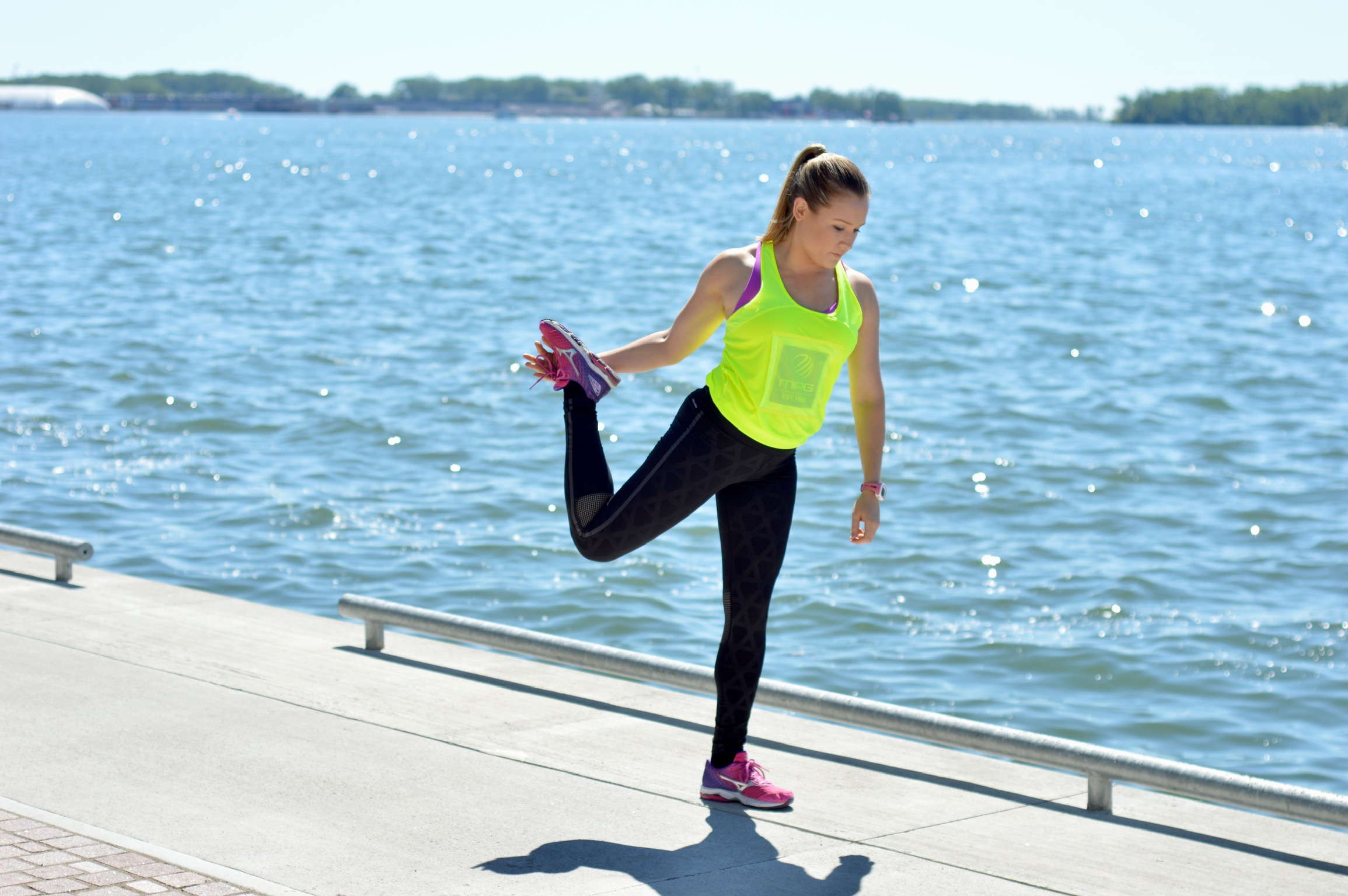 “We can’t thank Evelyn and the employees at Janssen Canada enough for the support you have shown for our programs,” says Team Unbreakable Program Coordinator Nils Blondon. “We are truly changing lives for the better and making a difference in our schools and communities.  We appreciate so much that you are giving back to and providing charities like ours with funds that help us to support those in need.”

Janssen Inc., is a pharmaceutical company of Johnson & Johnson and it has been an innovator in the Canadian healthcare industry for over 50 years. Its goal is to “help people live healthy lives. (The views and opinions expressed in this article are Evelyn Pyper’s and do not necessarily reflect the views or policies of any company in the Johnson & Johnson Family of companies.)

On July 23, adidas Canada staff held a basketball tournament as a social purpose fundraising for Team Unbreakable, which is one of their chosen designated charities. Eight teams from Ontario and Quebec competed in Toronto for bragging rights as the top team. Thank you to all who participated and took part in this wonderful fundraising effort! 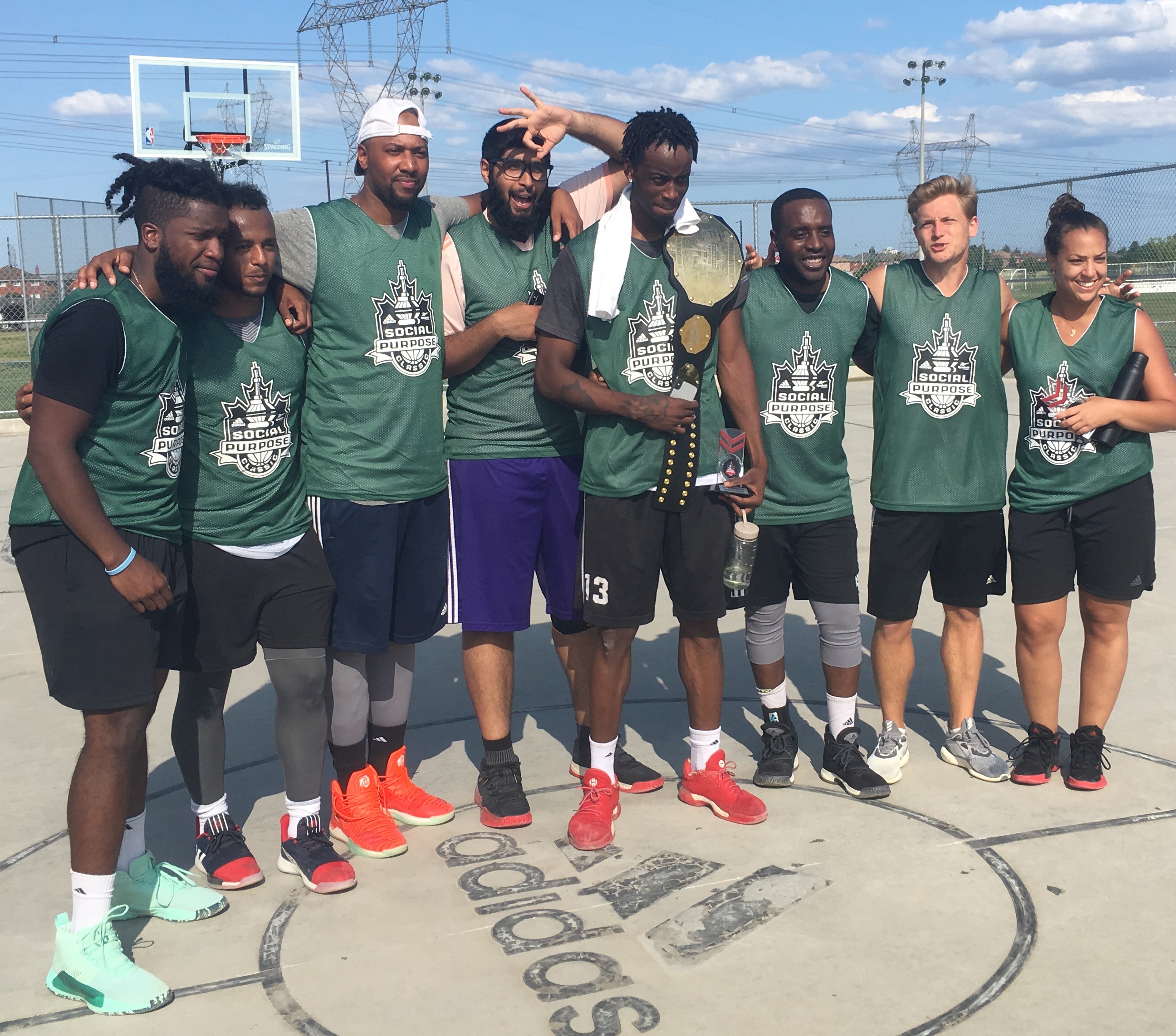 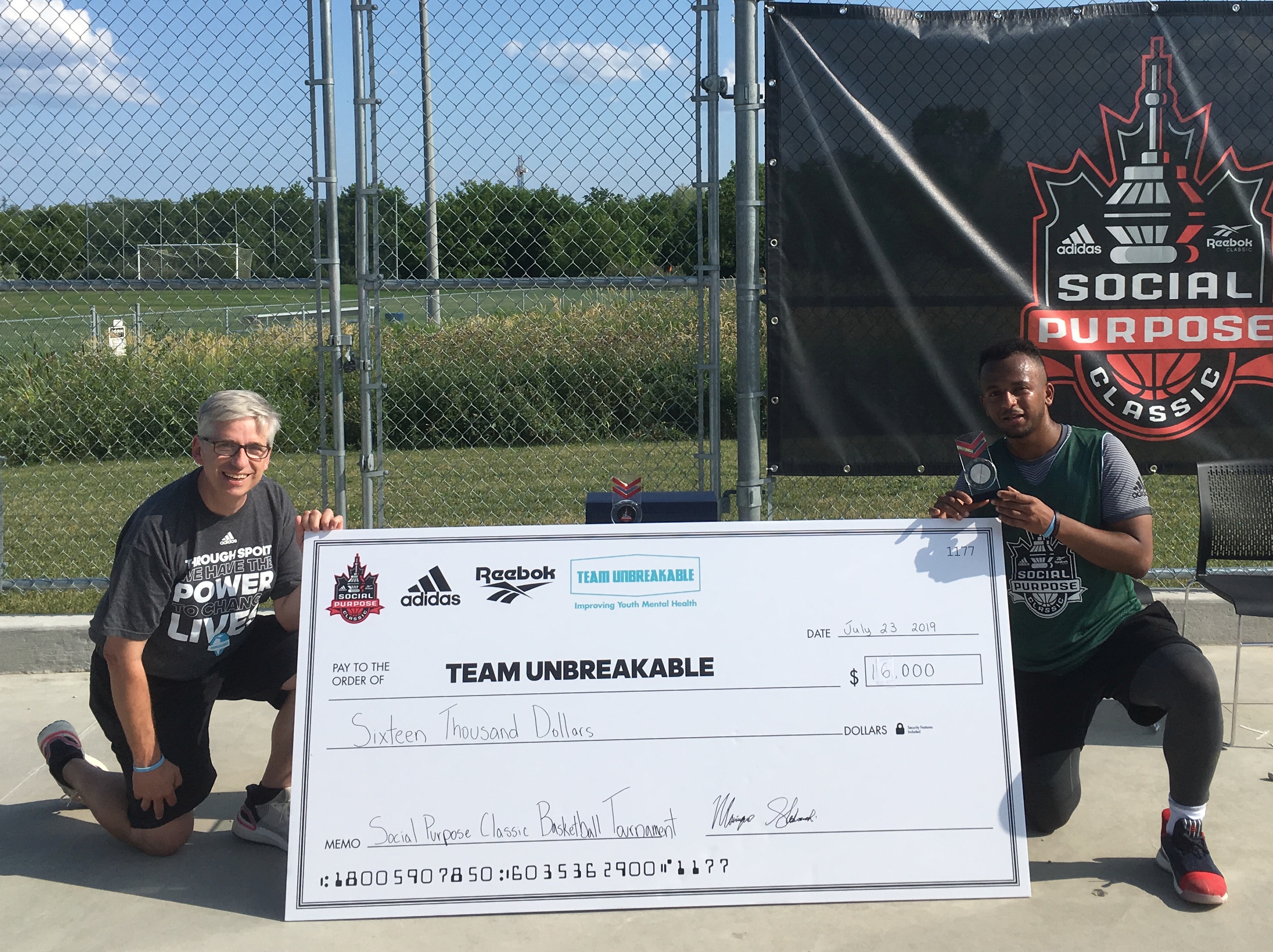 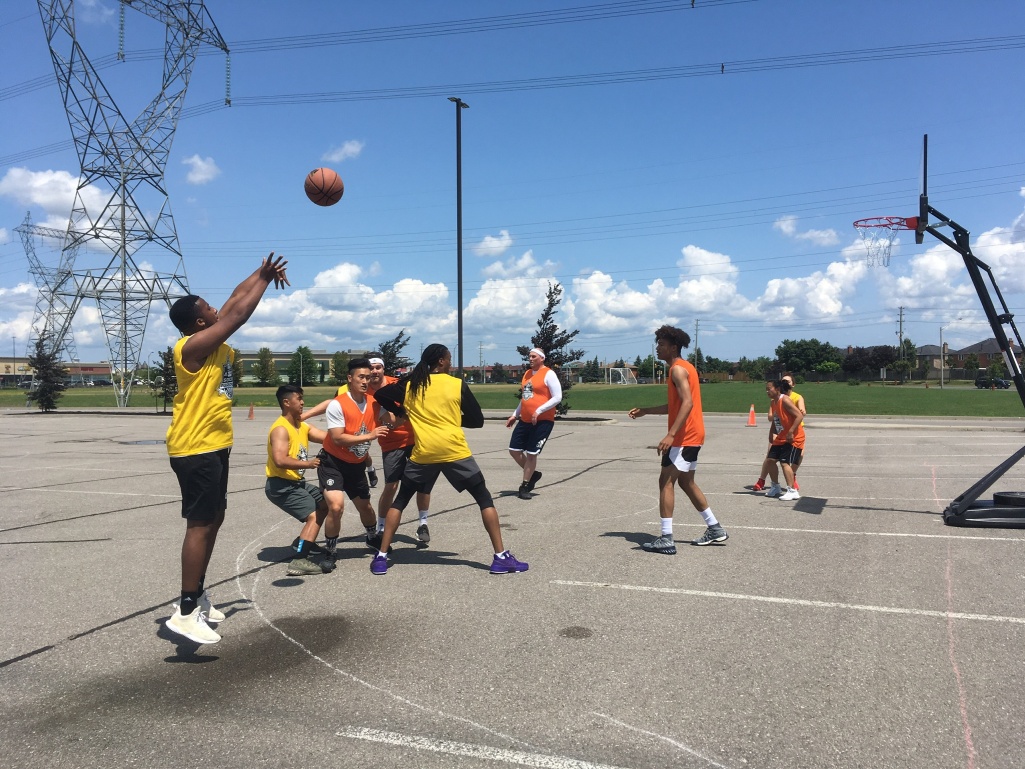 Team Unbreakable is a charity partner for the 39th Longboat Toronto Island Run on September 8.  Be sure to sign up as an individual or a team for the 5K, 10K or kids run.  Click here to register. Or contact us (nilsb@teamunbreakable.ca) if you want to volunteer with other Team Unbreakable supporters. The runs start at 10 a.m. and there will be a BBQ and prizes. We recommend purchasing your ferry ticket ahead of time. They can be purchased online here.